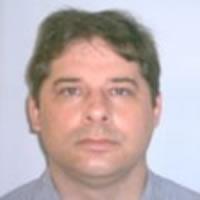 Sean-Patrick Scott graduated with a Bachelor in Science in Chemical Engineering from the University of Rochester, Rochester, New York in 1991. He graduated with a Ph.D. in Biochemistry and Molecular Biophysics from the University of Pennsylvania, Philadelphia, Pennsylvania, in 1998. His thesis was "Predicting and testing the structural basis of nucleotide discrimination in cyclic nucleotide activated channels" with Jaqueline C. Tanaka. He did his post-doctoral work with Irene T. Weber in the field of protein design, x-ray crystallography, and assay development funded by an NIH (United States) National Service Award at Thomas Jefferson University, Philadelphia, Pennsylvania, and University of Georgia, Atlanta, Georgia from 1999 to 2001. He was a special appointment research professor at Temple University, Philadelphia, Pennsylvania from 2002-2003 and a research assistant professor at University of Houston, Houston, Texas, from 2003-2005 funded by the American Heart Association to look at the structural and functional studies of the cyclic nucleotide binding domain of the HCN pacemaker channel. In 2007, Sean joined the Chair of Hematology and Cancer. Here he switched his field of study to trying to understand circadian rhythms in breast cancer tissue culture cell lines looking at mRNA, microRNA, and protein circadian like fluctuations. In 2015, he joined the Chair in Cellular Therapy, now called the Focus Group of Bioengineering and Regenerative Medicine. Since joining this focus group he has included stem cells and circadian rhythms as an area of interest. He has graduated 5 Master's students, 2 PhD student, and is in the process of graduating 1 more PhD students. In 2017, Sean rejoined the Mexican National System of Investigators as a SNI1 after being a member from 2009-2011. He served as Director of Licencia de Biociencias from 2013-February, 2017, at the Tec de Monterrey, Medical School. From 2013, he has been director of the MD/PhD program at Tec de Monterrey, Medical School.