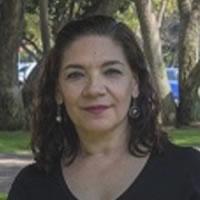 "To be a professor, an artist or a scientist involves a high level of resilience in the face of an ever-changing world." Any academic field in which art plays a part in the student's education awakes Rosa María Brito Serrano's interest. She set foot on a stage for the first time when she was just 5 years old and has not stopped since. She has been a dancer, choreographer, technical director and lighting designer. To her, being a professor is like rising the curtains and discovering a new stage in every performance. Designing and re-designing syllabus are as fascinating to her as creating immersive spaces to tell stories through video mapping. From her point of view, technological breakthroughs that lead to develop experiential encounters such as virtual reality, provide new theatrical languages and novel forms of interaction with face-to-face and online audiences. Therefore, the concept of worldbuilding as the creation of interactive spaces where the audience's participation can reinvent their surroundings is the motive for her research. Though theatrical art has been fundamental throughout her life, Brito Serrano is also drawn towards science; as a matter of fact, she assesed the posibility to study Cultural Anthropology and even to become an astronaut. After being a teacher for 21 years at Tecnológico de Monterrey, she considers that the education of a human being involves exploring several domains, since learning is a constant process that requires a sharp adaptability to the environment and to new discoveries.