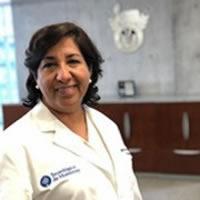 "My interest in clinical and health psychology lies in the various applications it has to treat behaviors, or disorders and to analyze and understand the personality and behavior of a person or a group of people." Graciela Medina Aguilar specialized in clinical psychology because she found that it would allow her to delve into understanding and attending to people. She knew it was a relatively new discipline in comparison to other areas of knowledge but nevertheless "took the risk" to study it, since it was not easy to describe the subjective and sensitive side of the human being. Still today, she believes her profession has a long way to go since progress does not happen overnight. However, she still finds it adequate to attend to people. Given the fact that clinical and health psychology is Medina Aguilar's vocation, she has not ceased to research and report her achievements through evidence documentation. This has allowed her to delve into clinical psychology, in addition to appreciating certain methodologies to attend to particular disorders. From her point of view, what clinical psychologists should focus on is on research in collaboration with other areas of knowledge, such as current trends on health psychology, so that through interdisciplinary hypothesis the biological bases of behavior, the attitude expression modalities and the relation to the social context the subjects of study live in can be understood.