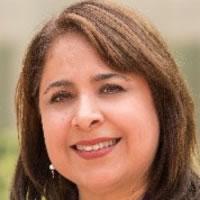 She holds a PhD degree in Trans-pacific International Relations (summa cum laude) and master's degree in Education with specialty in Humanities by Tecnológico de Monterrey. Lecturer of International Politics and Geopolitics. Member of the board of directors of the Mexican Association of International Studies. Received in 1986 the Presidential Academic and Fitness Award issued by the then President of the United States, Ronald Reagan, in recognition of her outstanding academic performance during her studies abroad in Ann Arbor, Michigan. As a professor at Tecnológico de Monterrey campus Guadalajara, she has received around thirty recognitions for being one of the best evaluated teachers by the alumni, and in 2015 she received the Inspirational Teacher award for her tenacity, commitment and passion in her role as a teacher. From 2007 to date, she has held a number of executive positions in different academic areas: Director of the Department of Communications and International Relations, Law and International Relations, Humanistic and Citizen Formation and currently holds the position of Dean of the School of Social Sciences and Government of the Western Region. Her research has been focused on the analysis of cooperation patterns for the construction of international agreements and regimes on climate and public policies for green growth in Asia Pacific. She holds an international certificate of Senior Ontological Business Coaching. She is a consultant and workshop leader for organizations based in Panama and Costa Rica. She has been a speaker at national and international conferences, as well as a speaker at political, community, and business forums on topics of the global agenda, communications and leadership. She has extensive experience in the media: for a decade she was a producer and host of the radio program on international affairs Bitácora, in co-production with the Radio and Television System of Jalisco and worked in the television program Tendencias. Her collaboration with various international and national NGOs has been notable: formerly as president and currently as member of the board of directors of the NGO Children International. Founder of the student chapter of Amnesty International in Guadalajara; collaborator with UNICEF; and has carried out improvement and fundraising projects for the Nacidos para Triunfar shelters and for a number of organizations such as Ministerios de Amor and Un Cielo para un Ángel. She has participated in political forums such as the Observatory of Women's Political Participation sponsored by the Jalisco's Women Institute and the State of Jalisco's System for Equality between Women and Men.