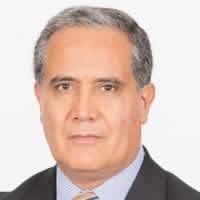 Gerardo Manuel Mejía-Velázquez received in 1980 a B.S. degree in Chemical Engineering from Universidad Autónoma de San Luis Potosí. In 1984 he received a M.E. degree in Process Systems from ITESM and in 1992 the Ph.D. degree from the Chemical Engineering Department at Texas A&M University. From 1980 to 1991, Dr. Mejia worked for different companies in Monterrey, San Luis Potosí, and Texas. He has been professor at the Universidad Autónoma de San Luis Potosí and at ITESM Campus San Luis Potosí. In 1992 he joined the Center for Environmental Quality of ITESM where he is Full Professor and Director of the Andres Marcelo Sada Chair on sustainability. He lectures courses in Environmental Engineering and in Chemical Engineering. He was coordinator of the mater program on Environmental Engineering and Founder of the Mater Program on Environmental Planning. He was a visiting professor at the Massachusetts Institute of Technology the fall of 2000 and invited professor in the OLADE-University of Calgary Program on Energy and Environment hosted in Quito, Ecuador from 2003 to 2007. He was Director of Air Quality and Climate Change of the State of Nuevo León from July 2010 to December 2012. Research interests of Dr. Mejía include Environmental Planning and Management for Decision Making on air quality, climate change and sustainability. He has worked in joint international research projects related to air quality modeling and education with professors and researchers at Carnegie-Mellon University, the University of Utah, The University of Texas El Paso, Texas A&M University Kingsville, the Southwest Research Institute, and the Massachusetts Institute of Technology. In Mexico he has been director of research projects with the Government of the State of Nuevo Leon, SEMARNAT (The Mexican Ministry of Environment), the Instituto Mexicano del Petroleo. He has worked in numerous consulting projects with the private industry and has participated in several national and international committees for SEMARNT, the State of Nuevo León and the Automotive Cluster. In 1996, Dr. Mejía received the Prize to the Academic Work and Research from ITESM Campus Monterrey.