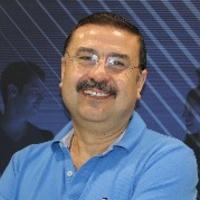 "I've always been interested in effective problem-solving using programming where many types of concepts are involved and mathematics act as support." After studying computational systems, Luis Humberto González Guerra earned a master's degree on problem-solving through programming. He has devoted most of his professional life to data structures and their manipulation, as well as the analysis and design of efficient algorithms, and competitive programming . He believes that being a teacher is a highly rewarding profession, since challenging students and encouraging them to grow and look for continuous improvement is something that feeds his soul. His students also inspire him to try harder to be a better professor every day. When time goes by and González Guerra runs into a former student that thanks him for having contributed to him becoming an excellent professions, he cherishes the moment as one of the most valuable acknowledgments because this means his teaching did not just stay in the classroom, but helped the student to become a better human being. One of the main challenges he faces as a teacher is identifying the differences among his students, since what can help one of them is not necessarily suitable for the other. And he is aware that encouraging every student according to his profile has two advantages: it helps him to obtain the best potential from his students, and also, it makes them enjoy every task they undertake.