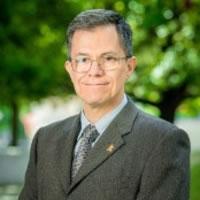 Professor Insignia Rómulo Garza 2014. "I'm drawn towards the possibility of learning a new science every day and of sharing that knowledge with the students that take an interest in it." From the scientific point of view, what interests Julio César Gutiérrez Vega the most is physics in general; however, he inclines toward fields such as optics, mechanics, electromagnetism, and quantum physics. He claims he can't explain why, but since his childhood, he has enjoyed abstract mathematics and the way it can apply to model processes both in physics and in other disciplines. He earned a doctorate in optics after studying for a master's degree in electrical engineering. The reason was mostly circumstantial, since his intention was to make fiber optic sensors to predict short circuit for the Comisión Federal de Electricidad; he suddenly realized optics had its own charm and decided to focus his research toward that field. Gutiérrez Vega claims his social responsibility as a university professor is the highly-specialized human capital formation. A real challenge since, even if times and material resources evolve, the matter is still the same after hundreds of years of schooling.