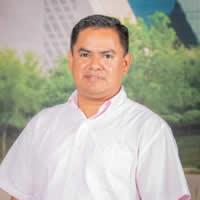 I am Oscar Martínez Romero. I received the degree of Mechanical Electrical Engineer in 1996, Master of Science in Manufacturing Systems in 1999, and Doctor of Engineering Sciences in 2011 of the Tecnológico de Monterrey. I am currently a Research Professor at the School of Engineering and Science, since January 2015 and Professor attached to the Department of Mechanical Engineering since January 2000. I worked part-time in the Center for Manufacturing Systems from 1996 to December 1999 as a professional support. I have been taught courses at the undergraduate level since January 2000 and postgraduate courses since 2008, for the Masters in Manufacturing Systems and in the Doctoral Program in Engineering Sciences, with a cumulative experience of 31 semesters, serving a population of more than 3,400 students, with a global average historical percentile of 46.15% and an average OGP of 1.54. In 2008, I joined the Research Group on Nanotechnology and Device Design, where I have generated various publications. I have had several research stays at international level, the last one being at the University of Girona, Spain, in the area of medical devices from of August 2013 to July 2014. In addition, I had a research stay at Rice University, focused on developing nanostructured composites, and at the University of Houston on the subject of intelligent materials from January-December 2005. In August 2012 to August 2014, coordinate the Chair of Eco-Innovation Entrepreneurship. I am currently a member of the National System of Researchers Level I, with 20 publications in refereed scientific journals, and 23 articles in international congresses. In extension, I have had collaboration in projects with global companies, such as Siemens, Whirlpool, Vitro, Prolec GE, Corporación Industrial de Moldeo SA de CV, Kubrelam , and Vidrios y Cristales Ontiveros. Where 12 technological developments have been generated. Also, I collaborate in the writing of research proposals for the chair of Nanotechnology. I am a member of the Thematic Network of Nanosciences and Nanotechnology since June 2016. In CONACYT Research Proposals: I have participated in the elaboration of different proposals of Basic Science and Innovation Stimulus Program where economic resources have been requested from the National Council of Science and Technology (CONACYT). The summary is: 4 PEI projects with a total budget close to $ 600,000.00 USD with Acertek and Whirlpool companies; A basic science project; 2 postdoctoral fellowships, and a research stay.