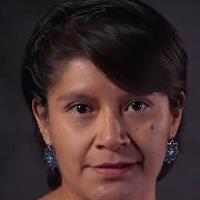 Luz Maria Alonso-Valerdi completed her professional studies at the Faculty of Electronics Sciences of the Benemérita Universidad Autónoma de Puebla (BUAP). Subsequently, she obtained her master degree in Bioelectronics at the Center for Research and Advanced Studies of the National Polytechnic Institute, and finally, she obtained a PhD degree in Computer Science and Electronic Engineering at the University of Essex, United Kingdom. She has been a lecturer for 13 years in different national and international institutions, and has directed around 20 theses, both at pre and post-graduate levels at BUAP, the Universidad de Guadalajara, and the Tecnológico de Monterrey. She currently works at the Tecnológico de Monterrey as a lecturer and researcher in Neuroengineering topics. In addition, she is responsible for and leader of the research group in Neuroengineering and Neuroacoustics, along with Dr. David Ibarra-Zárate. She is a member of the Mexican National System of Researchers, Level 1 in the Engineering Area, and has published around 20 articles in peer-reviewed journals, 30 articles in international conferences, and 2 book chapters. In January 2017, she was awarded, along with Dr. David Ibarra, with one of the five projects that are transforming Mexico into the Tecnológico de Monterrey. In October 2017, she obtained the Scholarship for Women in Science awarded by L'Óreal, UNESCO, CONACyT and the Mexican Academy of Sciences. In 2018, she was appointed as part of the jury that ruled the winners of the National Youth Award in the Science and Technology category. Finally, in January 2019, she was recognized by SINEMBARGO Magazine as one of the 10 most relevant Mexican scientists.