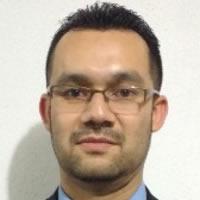 Herman Castañeda graduated in communication and electronic engineering from the Universidad Autonoma de Zacatecas, Zacatecas Mexico, and both the MSc. and Ph.D. in Electric Engineering with emphasis in nonlinear control from the Universidad Autonoma de Nuevo León, México, in 2010 and 2014, respectively. In 2015, he joined to the Tecnologico de Monterrey in Monterrey, México as Postdoctoral fellow, and since 2017 as Professor Researcher at Mechatronics department and Robotics research group. He has authored and co-authored in several publications in international peer-review journals and conferences. His research interests include design, modeling and control of autonomous air, water and ground vehicles and its applications of nonlinear control theory and observers.