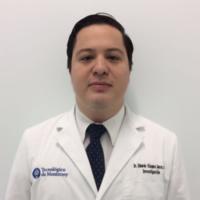 Eduardo Vázquez-Garza obtained his M.D. degree with Honors in Universidad Autónoma de Nuevo León, Monterrey, Nuevo León, México in 2006. In 2013 he earned his Ph.D. degree in Medicine (Oncology) from Aarhus University, Aarhus, Denmark. After earning his Ph.D. he worked as a Postdoctoral researcher in Tecnológico de Monterrey at the Cardiovascular Medicine and Metabolomics research group, where he continues to do research up to this day. He has published more than 22 scientific publications (articles and book chapters), participated in more than 20 national and international conferences. He is a certified flow cytometry and sorter based flow cytometry researcher. His current research efforts are focused on the development of diagnosis and response techniques and evaluation of the immune system in chronic inflammation and cardiovascular disease. Particular emphasis is placed on the understanding of the mechanisms involved in cardiovascular diseases exerted by inflammation. Also in the development of novel therapies for heart failure and pulmonary hypertension, associated with immunomodulators, nanotherapy and new compound research. Dr. Vázquez-Garza is a member of multiple organizations including the American Association of Immunology, the Mexican Association of Immunology and the National Researchers Council (Level I). He has participated in multiple fund raising projects. In 2015 he became a Research Associate / Posdoc at the Medical School at Tecnológico de Monterrey. He is part of the professor staff of the Biomedical Sciences PhD Program.