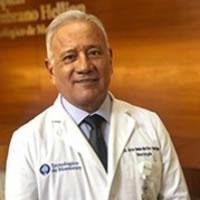 "I have taken a special interest in the areas of cerebrovascular and neurodegenerative disease, where the greatest diagnostic and therapeutic advances have occurred." Héctor Ramón Martínez Rodríguez is passionate about neurology as a whole, however, he is particularly interested in neurodegenerative diseases such as Alzheimer's, vascular dementia, Parkinson's disease, and amyotrophic lateral sclerosis, among others, which nowadays are diagnosed more frequently. This occurs due to the increase in life expectancy as well as the availability of better diagnosis methods. Ever since he was a student, what fascinated him the most about neurology was the close and affectionate relationship with the patient, both when obtaining clinical information as well as when carrying out the clinical examination, through which the precise syndromic and neuroanatomic diagnoses are obtained. He also enjoys the fact that, through this evaluation, he can suggest supplementary studies, something that has been lost in other specialties due to the automation of medicine in several areas. Martínez Rodríguez believes that, in order to better treat neurological disorders, it is necessary to conclude adequate training in internal medicine, and that one of the main challenges of his profession is to find out preventive measures and treatments, given that the frequency and prevalence of neurological disorders will increase to such a degree that in the next decade they will become a considerable health issue in our country, with great economic and social repercussions.