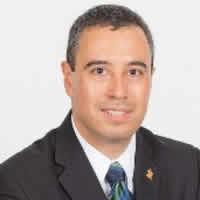 Alberto MENDOZA is Professor in the Department of Sustainable Technologies and Civil Engineering and Director of the Water Center for Latin America and the Caribbean, School of Engineering and Sciences at Tecnologico de Monterrey. He obtained his BS in Chemical and Systems Engineering and MSc in Environmental Engineering from Tecnologico de Monterrey, and his PhD in Environmental Engineering from the Georgia Institute of Technology. In January of 2001 he became a faculty member of the Department of Chemical Engineering at Tecnologico de Monterrey, with an adjunct position in the Center for Environmental Quality where he was appointed coordinator of the Air Quality Laboratory (2001-2004) and Director of the Center for Clean Technologies (2005-2006). From 2006 to 2009 he was the Head of the Department of Chemical Engineering. In addition, he has provided service as Associate Coordinator in Energy and Environmental Systems of the Doctoral program in Engineering Sciences (2008-2011), Director of the MSc program in Environmental Systems (2009-2011) and member of the academic senate of the School of Engineering and Sciences (2016-2017). From 2009-2014 he was the Leader of the Air Pollution Science and Engineering Research Group, and from 2014 to 2020 leader of the Energy and Climate Change research group. Dr. Mendoza is member of CONACYT's National System of Researchers (Level 2) and the Mexican Academy of Sciences. He has lead research projects, conducted professional consultant activity and has been appointed to national and international committees in areas related to energy and the environment. His main research interests are in the field of air pollution science and engineering, especially in the areas of air quality modeling, emissions inventory assessment, ambient air sampling, control strategy design, environmental impacts of the energy sector and thermochemical processes to valorize waste carbonaceous materials.