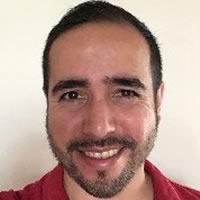 Dr. Marco A. Mata-Gómez obtained his bachelor's degree as a pharmaceutical chemist biologist from the Autonomous University of Coahuila in 2005. In 2008, he obtained a M.Sc. degree in biotechnology from the same university. Later in 2009, he joined the Bioprocesses Research Chair where he worked as an assistant researcher. In 2012, he started his doctoral studies in biotechnology at Tecnológico de Monterrey in Mexico, and obtained his Ph.D. in 2016. During his doctorate, he participated as visiting scientist at the Downstream Processing Laboratory in Jacobs University-Bremen (Germany) for ten months. After completing his doctorate, Marco joined the Biotechnology Department of Tecnológico de Monterrey, at Puebla campus, where he worked as part-time professor. In September of 2017, Dr. Mata became full-time professor of the Bioengineering and Sciences Department in the same campus, attached to the Bioprocesses research Group, where he is conducting research in the area of development of novel strategies for the recovery and purification of proteins and antibiotics. Marco also is also working in the design of microfluidic systems for the manipulation of biomolecules. Professor Mata is also working in the production of novel antibiotics using bacteria in collaboration with the Institute for Technical Microbiology from Mannheim University of Applied Sciences located in Germany. Additionally, Dr. Mata has worked in the design of bioprocesses for the extraction of bioactive compounds and enzymes through solid-state fermentation processes. Currently, Dr. Mata is an active member of the National Researchers Council as SNI Level 1. Marco is national leader of the design of the academic programs of 2019 of the School of Engineering and Sciences, active participant in activities related to the new TEC21 model. He is also involved in academic research such as NOVUS projects.