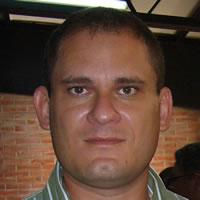 Abrahan Mora was born in Maracay, Venezuela, on October 29, 1974. He finished the B.S. Program in Chemistry at the Simón Bolívar University, Caracas, Venezuela, on March 2002. He began working in April 2003 in the Hydrobiological Research Station of Guayana (La Salle Foundation of Natural Sciences) in Ciudad Guayana, Venezuela, exercising the position of Head of the chemistry laboratory. During his stay in that institution, he mainly worked with the geochemistry of organic matter and major and trace elements in the Orinoco River and its tributaries, and the impact caused by the industries on this river and its floodplain. Similarly, he began his Doctoral studies at the Polytechnic University of Madrid (Spain), which he finished on June 2011. His Doctoral Thesis was related to the spatio-temporal variation of organic matter and dissolved major and trace elements in the Orinoco River system. He began to work as Researcher at the Center for Oceanology and Antarctic Studies of the Venezuelan Institute for Scientific Research (IVIC) on January, 2012. During his stay in IVIC, he worked with the monitoring and analysis of heavy metals in sediments and biological matrices, as well as the content of radionuclides in marine sediments. Also, he was the head of the Fifth Venezuelan Scientific Expedition to the Antarctic Continent. From August 2014 to August 2015, he did a stay in the National University of Loja (Loja, Ecuador) as Prometeo Researcher, working in the impact of small-scale gold mining activities on rivers, biota and populations living near mining zones of Ecuador. From January 2016 until date, Dr. Abrahan Mora began working as Posdoc in the Water Center for Latin American and the Caribbean of Tecnológico de Monterrey (ITESM), Monterrey, Mexico. Since January 2020, Dr. Mora hold a Research Professor position in the Tecnologico de Monterrey Campus Puebla